The South Western Great Dane Club held their 36th . Leagues Finals Weekend at
Brean Leisure Park over the weekend of the 11th., 12th. & 13th. of November.

A number of people had arrived earlier in the week but the main festivities
started on Friday evening after both food and liquid refreshments with the
now usual quiz. The quiz was won by "Price's Prats" for which they received a larger
bottle of "Fizz"; this was followed by karaoke and dancing until midnight. After
strong competition the prize of a Dane Model was presented to Sara Pepper.

The main event of the weekend started at 2-30pm. With a glass of wine for all
with orange juice for those who would have to drive later. All exhibitors
collected a super rosette from Sue Cottrell & Yvonne Byrne then at 3-00pm.
Sally Lewis introduced the dog and bitch top and runner up veterans and
colours, all receiving a memento from David Cottrell as they entered the ring.
All but the top colour dogs left the ring and David introduced the judge, Mr.
John J Walsh from Ireland, who proceeded to assess the dogs choosing Price's
Leamap Chivas Regal as Best Colour League Dog on the Night. The dogs were
replaced by the bitches and the judge chose Waring's Ravendane Queen Of
Darkness For Elleyenda, with the dog going Best Colour on the Night and
receiving a Goody Bag from CSJ Specialist Canine Foods.

The judge left the room and Sally introduced the Premier League Dogs in
Owner Alphabetical order as they paraded into the ring, the judge returned
and after judging each exhibit he presented each one with a memento then
Sally announced the top three in reverse order with Ryan & George's Keirkanes
King Of The Throne taking top spot. The judge again left the room and the
Premier League Bitches were introduced as they entered the ring. The judge
returned again and after going through the same procedure the top three were
announced with Donnelly's Garsak City Of Angels At Primus taking Top spot
and then after challenging the dog was awarded Top Premier League on the
night receiving the CSJ Goody Bag.

The procedure was repeated for Superleague Dog and then Bitch, with Webb
and Morgan-Evans' Ch. Vanmore Stop And Stare At Castleton Top Dog and Day

The dog taking Superleague Supreme Winner on the Night and receiving the goody bag.

David Cottrell entered the ring to thank the judge and presented him with a
memento of his appointment.

After a break to settle the dogs and freshen up everyone assembled in the
dining room to partake in a four course meal followed by the presentation of
all the trophies and special glassware, announced by Sally and handed out by
the Leagues Judge ably assisted by the Leagues Cup Steward Carol Gray, for
their achievements over the previous twelve months.

The festivities were followed by a disco and dancing until the early hours of
Sunday morning. Later Sunday morning David Cottrell opened the Open Show,
15 minutes late to allow for a diversion between the motorway and the venue.
David introduced the judge Mrs. Mary Walsh, the daughter in law of the
previous evenings Leagues Judge, she had not however been present during
his judging. With Leagues points on offer at the show it was well attended and
Mary's choices were best dog Seddon's Tenaya Cherokee Lone Wolf, winner of
Open Dog and best bitch Donnelly's Garsak City Of Angles At Primus, winner of
Junior Bitch, also taking Best in Show, the dog going Reserve and Best Opposite
Sex. Best Dog Puppy was Bollons' Bandwar For Aces High and Best Bitch Puppy
and Best Puppy in Show was Tempest's Adoreadane Just The Ticket. BIS, RBIS
& BPIS all received a special rosette and a CSJ goody bag.

David thanked Mary and presented her with a memento of her day and the
show closed giving everyone time to head homeward before it got dark.

The Officers and Committee of the SWGDC thank all those that attended the
weekend for again making it another successful event and for all the messages
of thanks received, that is what makes it all worthwhile.

A full list of League Finalists and results can be downloaded from the Library: documents/leagues-catalogue-2016.pdf 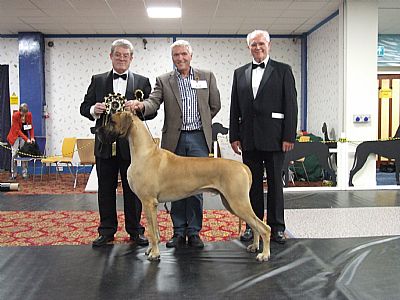 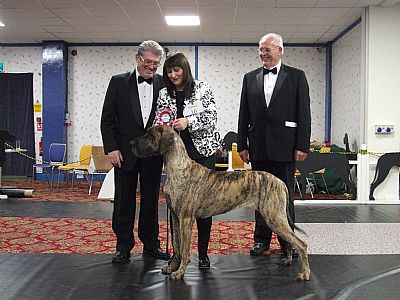